Sky Arts Landscape Artist 2019 – I Was A Wildcard!

Why not have a go? Despite only being a beginner, I decided to enter Sky Arts Landscape Artist of the Year – 2019.

I thought to myself, why not? Just because I consider I’m not very good, art is subjective and other people might think my work is wonderful? Oh, how she laughed…

You can imagine how thrilled I was to be “selected” as a Wildcard for the heat in Gateshead! I have not been able to reveal anything about it due to filming restrictions, but as the programme is currently airing on television, Sky have now granted us permission to talk about our personal experience.

To apply for the competition, you submit one image as your main submission piece, plus two supporting examples of your work. I submitted three images, all created with pastel – 12 x 9 inches.

The image below was my main submission. I wanted to try something different to my general tendency to paint a pretty view. Quite by accident, I came across a photograph online of a man walking his dog along Regents Canal in London.

The photographer, Tom Rothery, kindly gave me permission to copy it. Tom’s photograph is wonderful and I truly haven’t done it any justice! 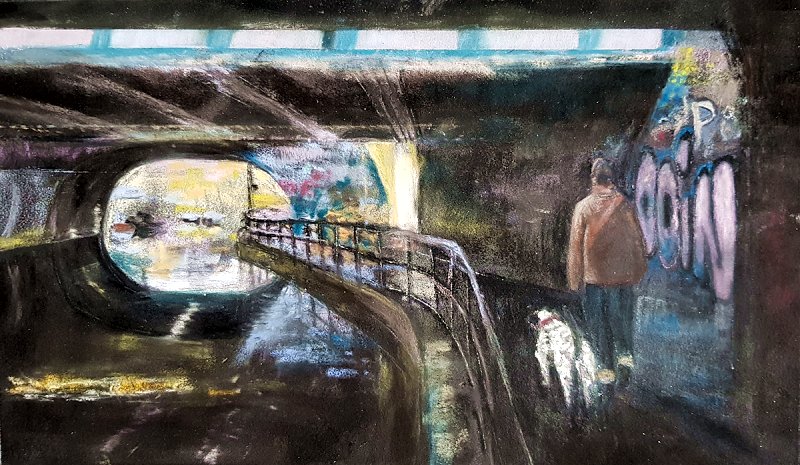 Copyright of original photograph with kind permission from Tom Rothery

My main submission was supported by the two paintings below. To be brutally honest, the three images together form my complete body of work as a beginner, so I had little choice!

I wasn’t selected for the competition heat at Gateshead, but I was absolutely thrilled to be invited to take part as a Wildcard!

I was advised by the production company that during the filming of the series it had rained during every heat so far, and to ensure therefore, I came prepared with some form of protection against the elements.

Wildcards are not permitted to bring gazebos or tents, only umbrellas. Pastels do not cope well in the rain, so having never used them before, I decided to have a go at painting in oils. Oh yes… How I love a challenge!

I had a hunch we would be asked to paint the Millennium Bridge at Gateshead, which proved to be correct. I grabbed a photograph from the internet to practice my non-existent oil painting skills, timing myself, as you only have four hours to complete your painting during the competition.

My effort was a complete disaster! A good lesson learned… There is much more to colour mixing and paint handling than I ever imagined. Artists who paint in oils everywhere have my utmost respect! 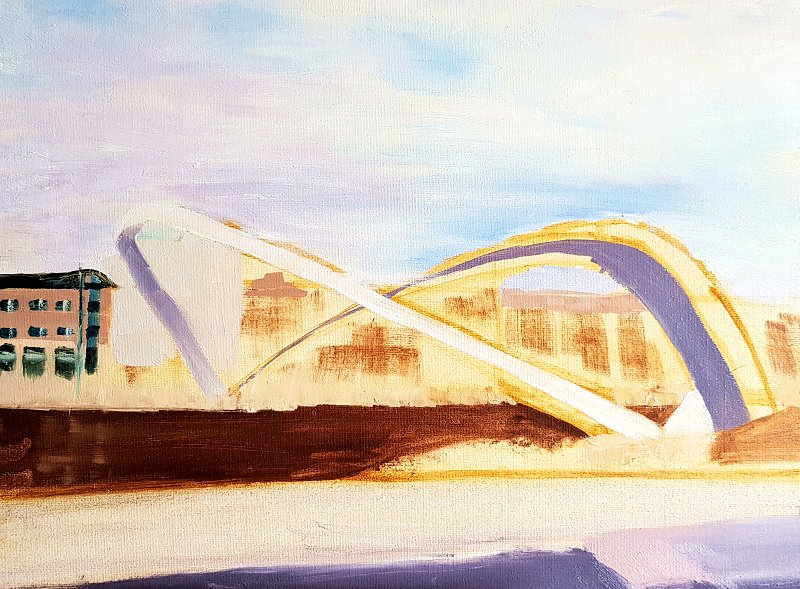 By this point, I was now feeling somewhat disheartened and concerned, so I researched the weather forecast for the day of the heat. The forecast was cloudy in the morning, with sunny spells in the afternoon and only a slight risk of showers.

Decision made. I was taking my pastels, but oh, what a lot of equipment you need! Don’t you? 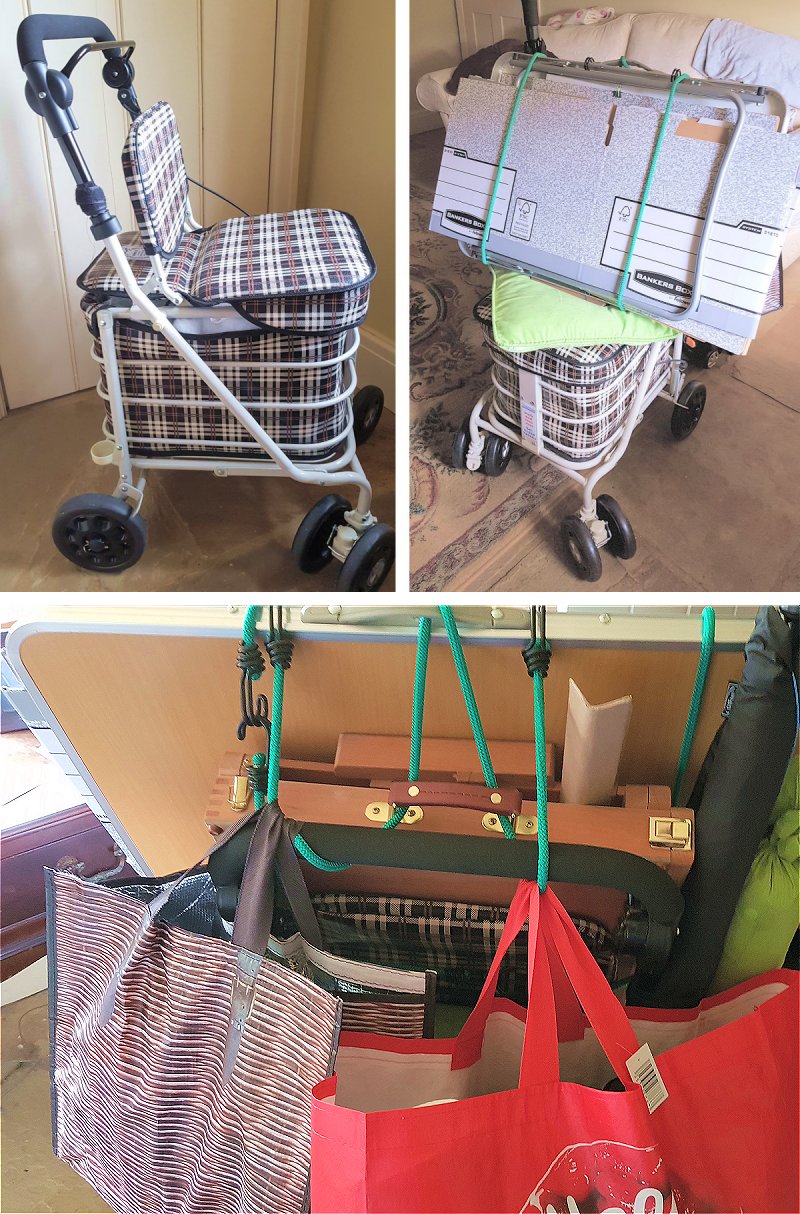 Having never painted en plein air before, I made the rookie mistake of taking everything but the kitchen sink!

I purchased the shopping walker trolley especially to transport everything for the competition, justifying the expense, as I figured it will come in handy in the next few years, given I am now 60 years young. My mum has one of these, but refused to part with hers, even for one single day!

The trolley is very well made and sturdy and is also a seat. Perfect! All my art materials went inside and everything else such as the easel, table, kitchen roll, etc. were strapped to the trolley with bungee cords. It was like a giant game of Jenga! I had to photograph the set up so I could remember how to fit it all back in place again!

Day Of The Competition Heat

The day of the heat finally arrived. We were asked to register at 7:15am in the morning, by the Millennium Bridge in Gateshead. The atmosphere was wonderful. Everyone was so excited and looking forward to the day.

I was first to arrive, shortly followed by a gentleman dressed as a Steampunk, who told me he wanted to “be on the telly” and was hoping his outfit might do the trick. Filled with pride and enthusiasm, I asked a member of the production company if I had been selected on merit or was I just a “sad random loser“?

The young man was very kind and explained to me that Wildcards are telephoned at random (so the answer was yes!) until they have 50 confirmed names for each heat. The production company do this apparently, to encourage diversity of the artwork and make the programme potentially more interesting and entertaining.

Mr. Steampunk did get interviewed and filmed, so his strategy clearly worked. I am looking forward to seeing if he made it past the editors cut, when our heat is aired on Tuesday 29th October!

So registration complete, we were all asked to “walk in” together and find a place to set up and start painting. 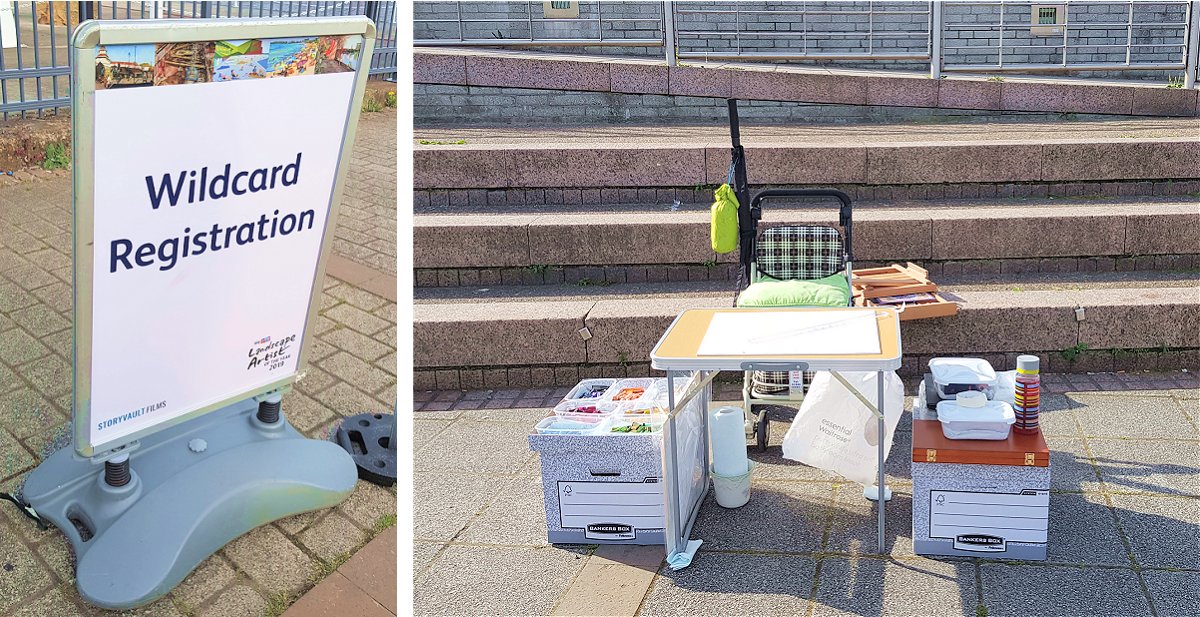 We had four hours to complete our masterpiece and we were not allowed to grid up until the very start.

The image below shows the view opposite from where I was sitting… The photo appears a bit odd, as it’s a photo of the image displayed on the screen of my iPad, hence the dodgy colours. I used Jackson’s Art Grid software. It is disappointing Jackson’s don’t provide this app for Android. If you know of any apps that will do the same thing, please let me know… 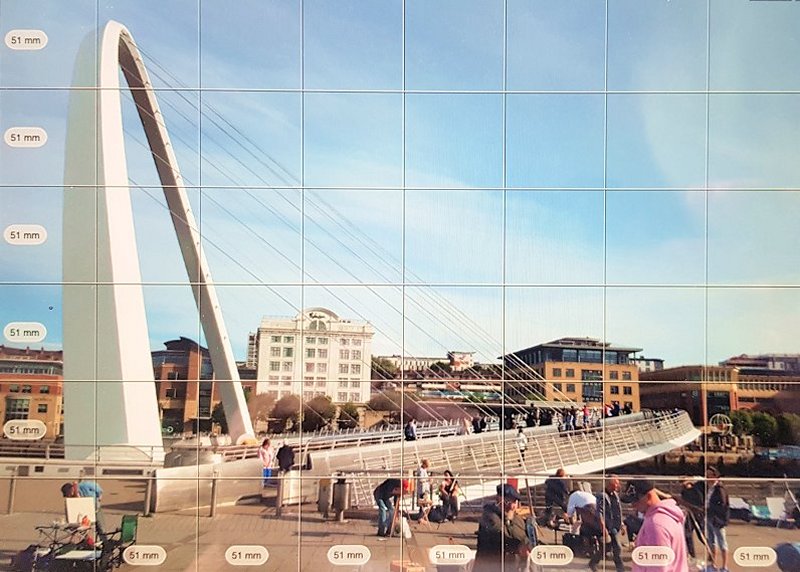 We were told we could sit and paint from the bridge if we wanted to, but we must get off the bridge at 12:00pm when it would open up to let boats through. I decided against this, as it seemed like too much hassle to move my “Jenga Studio” setup, complete with kitchen sink, anymore than absolutely necessary!

I was nervous, having never painted in a public place before. In addition to the camera crew, production company employees, judges and TV celebrities, there seemed to be a lot of members of the general public milling around too…

Stephen Mangan in particular was lovely… he was very chatty and stopped for countless members of the public so they could take a selfie with him.

I took over an hour to complete my drawing. I was very careful, as I knew the angles of the bridge had to be correct. Whilst I was drawing, one of the judges, award-winning artist Tai Shan Schierenberg, told me that so far, he hadn’t seen anyone draw the angles and curves forming the bridge correctly.

Tai returned a bit later and congratulated me when he saw my final drawing… “Well done, you’ve managed it!”

Once my drawing was in place, I started to paint with my pastels. Not the best choice of medium for an image with lots of straight lines and fine detail. I decided a good approach might be to block in areas of colour and add the detail later… 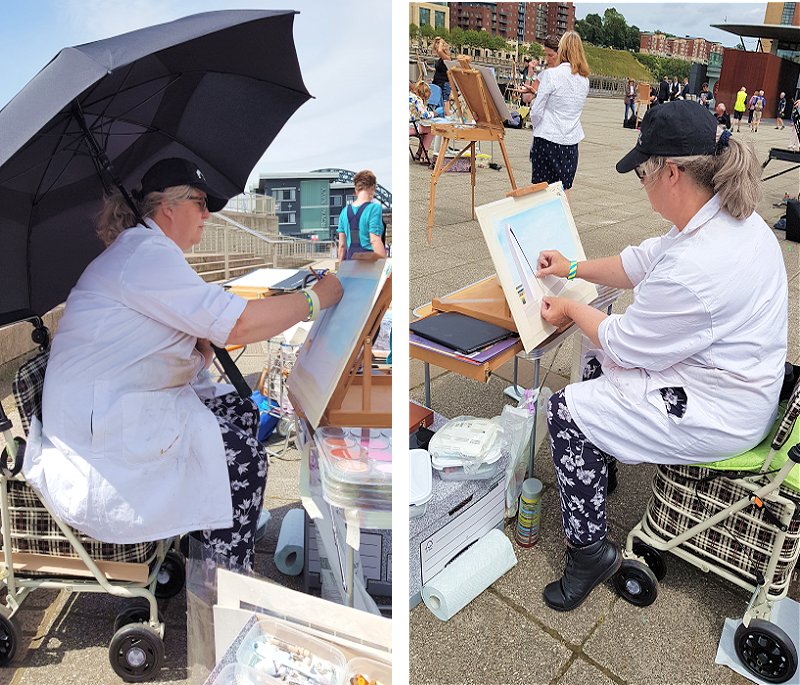 The consequence of my blocking in strategy was, that I accidentally stumbled upon a completely different style… very minimalist and Hockney-esque! To achieve the straight lines, I used masking tape to define the sharp edges… 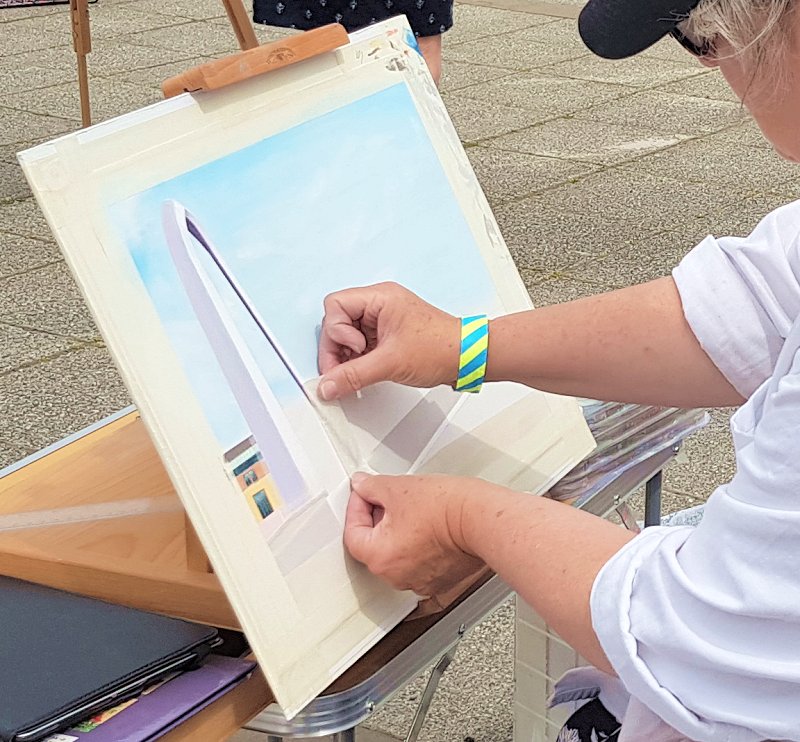 The outcome being, that my painting was unlike anything everyone else around me was doing!

One chap near me was clutching a fistful of half a dozen paint brushes, all dipped in different colours of acrylic paint. He was standing over a very large canvas and dribbling the paint all over. The result was very impressive and colourful.

Another lady was cutting up bits of coloured paper from old magazines and creating a mosaic style collage. It was just lovely and so clever.

My picture caused a gasp of amazement from judge and independent curator Kathleen Soriano…”Oh wow! That’s soooo minimalist…Do you think you will finish it in time?“

Clearly not from my rate of progress…but I was spurred on by lots of encouraging remarks from members of the public, and Stephen Mangan said he really, really liked it and would like to see it when it was finished.

So would I Stephen, so would I… but alas, my Gateshead masterpiece is still a work in progress! 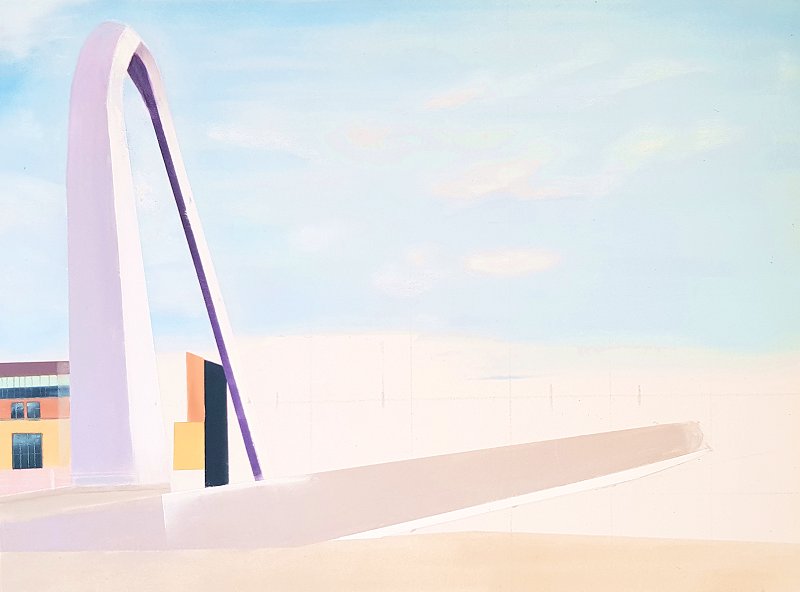 Clearly, I was not selected as the lucky Wildcard to go through to the semi-finals… but the day didn’t end there. We were all invited to watch the filming of the judging, of the artists who had won a place in the actual heat. 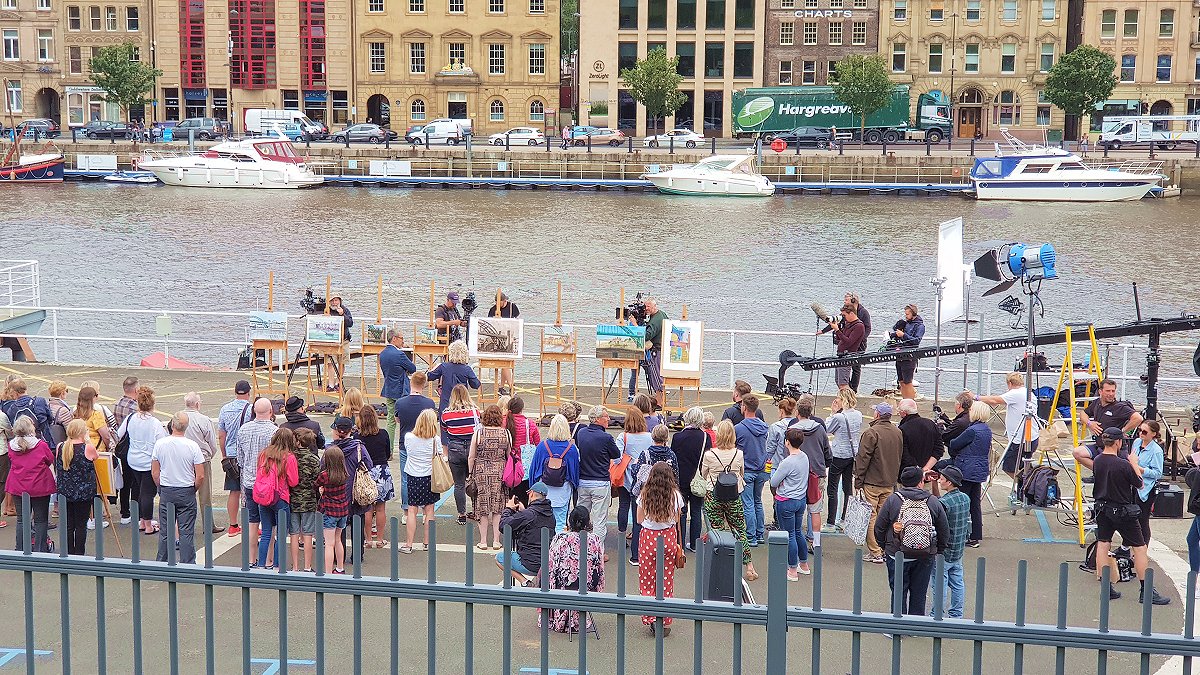 I was too tired by now to venture down into the crowd, so I observed from a high point. In the photo you can see Tai Shan Schierenberg and Kathleen Soriano discussing the work produced by the eight successful artists in the heat.

I got chatting to a lady stood next to me at the railings, who commented that she had been down and looked at the paintings being judged and thought the Wildcards had produced more interesting and exciting work. Perhaps the production employee I met at the start of the day was right?

The lady went on to say that one Wildcard had created something so radically different, and that she loved it so much she had taken a photo of it. The lady proceeded to show me… and guess what? YES! It was quite a shock to discover it was my painting!

I had an absolutely fabulous time. I can honestly say it was the best experience of my short artistic life to date. The atmosphere and camaraderie were second to none. I will definitely enter Sky Arts Landscape Artist of the Year again next year, but not because I think I have a hope… because it was such good fun and such a wonderful experience.

Why don’t you have a go too?

I have always wanted to learn how to paint, ever since I became aware of my uncle's wonderful landscape oil paintings.
I am very much a beginner. This website is a diary of my journey as I learn to become a decent artist.

This website uses cookies to improve your experience while you navigate through the website. Out of these cookies, the cookies that are categorized as necessary are stored on your browser as they are essential for the working of basic functionalities of the website. We also use third-party cookies that help us analyze and understand how you use this website. These cookies will be stored in your browser only with your consent. You also have the option to opt-out of these cookies. But opting out of some of these cookies may have an effect on your browsing experience.
Necessary Always Enabled
Necessary cookies are absolutely essential for the website to function properly. This category only includes cookies that ensures basic functionalities and security features of the website. These cookies do not store any personal information.
Non-necessary
Any cookies that may not be particularly necessary for the website to function and is used specifically to collect user personal data via analytics, ads, other embedded contents are termed as non-necessary cookies. It is mandatory to procure user consent prior to running these cookies on your website.
SAVE & ACCEPT